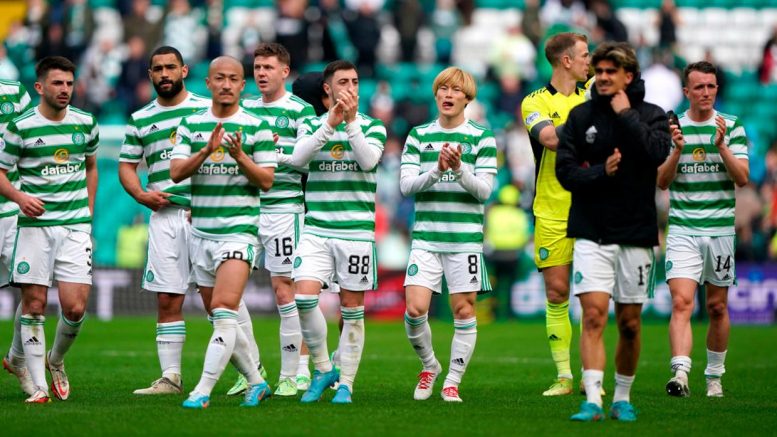 Celtic thrashed St Johnstone 7-0 at Parkhead to extended their lead at the top of the cinch Premiership to nine points.

he hosts went in front when Reo Hatate fired home before Giorgos Giakoumakis made the most of a poor pass to double their lead and Daizen Maeda added the third 10 minutes before half-time.

Saints conceded a penalty five minutes after the break and Josip Juranovic converted from the spot.

Matt O’Riley then scored a brace and Liel Abada finished off a miserable afternoon for the visitors by netting Celtic’s seventh 12 minutes from time.

Andy Halliday’s double helped Hearts come from behind to secure third place with a 3-1 win against Hibernian in the Edinburgh derby.

Hibs took the lead through Drey Wright before Halliday equalised just before half-time.

Stephen Kingsley scored straight after the break to give Hearts the lead and Halliday soon found his second goal of the game to secure three points.

Bottom-of-the-table Dundee came from behind to draw 2-2 with Dundee United in their derby clash at Tannadice.

United took the lead with a Nicky Clark header and Charlie Mulgrew added a second just after half-time with a curling free-kick into the top corner.

The Dee then scored two goals in two minutes to equalise, with Daniel Mullen grabbing the first and Charlie Adam adding the second, but the Terrors held on to remain fourth.

Motherwell scored a late equaliser to snatch a 2-2 draw against Livingston and finish in the top six.

Odin Bailey put Livingston in front in the 26th minute and Alan Forrest doubled the lead in the second half.

Callum Slattery pulled one back for Motherwell before Ricki Lamie struck in stoppage time.

A late penalty saw Ross County earn a top-six finish with a 1-0 win against Aberdeen, with Joseph Hungbo scoring from the spot.