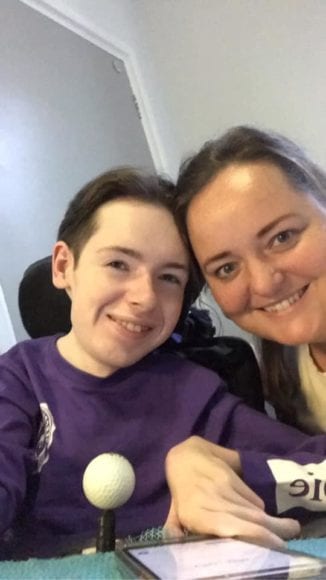 A DUBLIN teenager has finally received his first treatment of the ‘miracle’ drug Spinraza – a year after he was first approved for it.

The Clondalkin teen, a student at Maynooth University, has campaigned tirelessly with his mother Lisa but their efforts were further delayed by the coronavirus.

A delighted Lisa told Dublin Gazette: “Glen received his first injection last Friday and is doing very well… some good news in these not so great times.”

People Before Profit TD Gino Kenny, who also lobbied for the drug, said: “It’s been a

Glen was first approved for Spinraza in mid-2019. Delays were compounded by the fact that a clinic being established at Beaumont Hospital was postponed due to the pandemic.

The health service faced a shortage of the specialised medical personnel needed in the administration of the treatment, which involves injecting the drug into fluid surrounding the spinal cord through a needle inserted into the lower back.

“We are so grateful to each and every person that supported our family in this campaign, it was such an emotional day for us and one we will never forget.

“Here’s to an amazing journey that we can’t wait to share with him.”

Second year English literature student Glen is cocooning with his family in Clondalkin and his mobility has reduced in recent months.

He was 17 years old when the State gave approval for the drug treatment for 25 children with the aggressive illness, but by May of this year only half had received the drug.

He said at the time: “Imagine if there was a cheque for €1 million and it was just diving out of reach.

“That’s how it’s been for the past year. Salvation is just there and it’s just out of reach for whatever reason.”