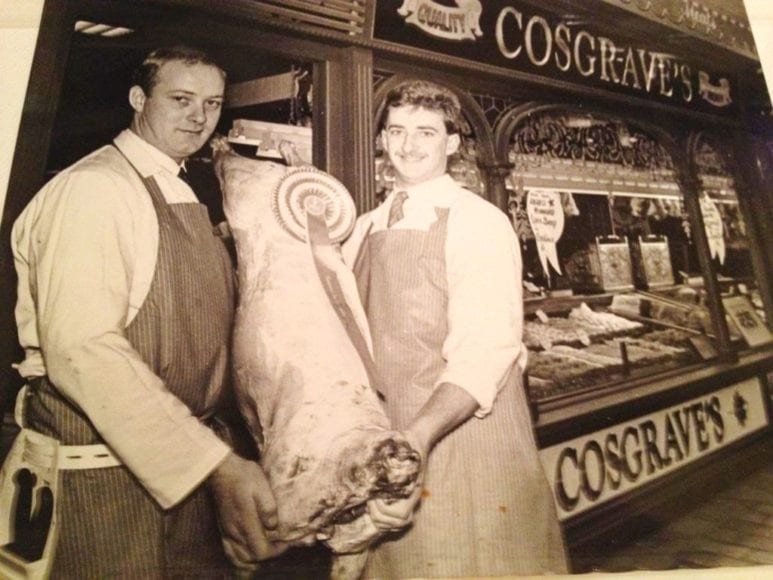 WHEN it comes to generations-old family-run businesses few can compete with Cosgrave’s – The Butcher Shop.

The Dublin victuallers can trace its roots back to 1892 when Ellen Cosgrave – a mother of 21 children – and her husband Charles set up shop at Eden Quay.

After her husband’s death at the turn of the century, the resilient widow opened another shop in Ranelagh in 1901, with a third opened at South Richmond street around 1930.

The Cosgrave sons and grandsons continued the family tradition with animals bred, and slaughtered, at Barns Elms, where Doreen still lives at the family home.

Business flourished during WW2 until the Lady Meath, carrying 700 of Cosgrave’s cattle to the UK, sank after a mine exploded underneath the ship.

There were no fatalities but all the livestock drowned, and with no insurance, no financial reimbursement and Cosgrave butchers’ shops were closed. However, Phil Cosgrave continued to farm at Barns Elm and also ran a dairy enterprise with the family also running a successful milk round.

Roll on to 1983 when Ellen’s great, great grandson Declan opened a shop at Northside Shopping Centre. His son Jeff is the fifth generation in the family trade and Cosgrave’s now boasts outlets at the Omni Shopping Centre in Santry; Clarehall at Malahide Road; Ashleaf in Crumlin and Ballybrack.

According to Declan and Jeff coddle remains a firm favourite with customers who come in weekly for bacon pieces and sausages, but equally will ask for Scotch fillet steaks, lamb and seasonal specials including the One Cent Specials and weekly offers.

“We are currently undergoing a complete rebranding to Cosgraves 1892,” Jeff told Dublin Gazette. “This will involve a complete refit of all of our shops to a much slicker, new and fresh look.

“What we want our customers to be assured of is the quality and traditional methods in butchering we pride ourselves on, and apply them in a modern way to provide high quality convenient cuts and meals.”

Goatstown Educate Together Opens its Doors