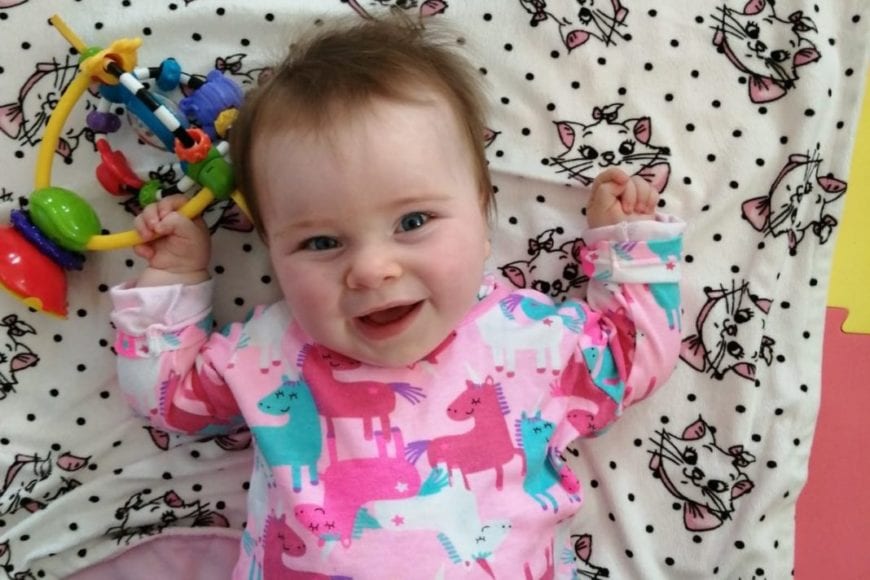 THE family of a little girl born with a rare neuromuscular condition have issued an appeal for “one last push” to raise the funds they need for a life-saving drug.

Keith Mulhern and fiancée Karen Vickers are in a race against time to raise the e2m needed to treat their 11-month-old baby daughter Livie.

Livie (Olivia), who turns one in August, was born with spinal muscular atrophy (SMA) type 1 and she needs treatment with the world’s most expensive drug in the US.

Her mother Karen, from Garristown in north Fingal, had a normal pregnancy, and there was nothing unusual until she started missing some milestones.

Dad Keith said it was very difficult to get Livie seen due to the coronavirus lockdown.

“We thought it might be a muscle issue,” the Donegal native recalled. “Something a physio could work out.

Livie was finally diagnosed with the degenerative condition – which means she lacks the gene which creates the protein needed to keep nerves healthy – at Crumlin Children’s Hospital in April.

Keith said: “She’s all there, fully alert. She has a fantastic personality in her. She loves looking around the room, sussing people out.

“She’s just the most beautiful little baby, her smile would melt your heart.”

With no treatment, children with the condition would struggle to live past their birthday as their muscles waste away.

Breakthrough drug Zolgensma would give Livie a functional copy of the gene she’s missing – but it would cost the family €2.1m to get a hold of in America, as it is not available in Ireland.

“With a bit of work, she could claw back parts of her life that could be lost,” Keith said.

“It’s quite effective at preserving the muscles around her breathing. There’s no point in dressing up – we’re in bad times here. She’s getting weaker.”

Fundraisers including an online page have so far raised just shy of e775,000 with 25,000 people rallying to support the family.

They also received a generous e1m pledge from the Do It For Dan campaign for Dan Donoher, who has the same condition as Livie but now cannot travel to the US for treatment.

“We don’t have as much time as we thought,” said Keith. “We’re trying to push this fundraiser over the line to get it to Livie in time.”

Loving Local: Getting back to business with Blanchardstown Credit Union