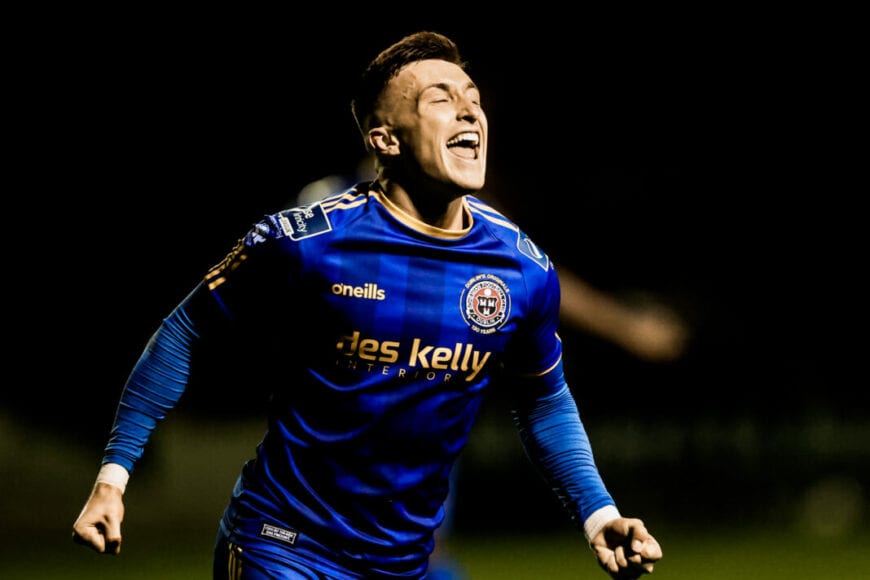 It wasn’t quite the ‘Riot in Ringsend’ when, during the 1913 lockout, trade unionists clashed with the crowd of football fans following Jim Larkin’s suggestion the Bohemians team was home to ‘scabs.’

There wasn’t much of a crowd of any sort at the game, of course, though Shelbourne were able to accommodate a small number of vocal fans under Level 3 restrictions.

And for half an hour, at least, there was very little to celebrate on the field as two teams at opposite ends of the table largely cancelled one another out.

That changed in the blink of an eye, however, and it was the pace of Grant, who was this week left out of the Ireland Under-21 squad to face Italy, that proved the catalyst.

A Shelbourne attack broke down high up the field and Bohs broke quickly, Andre Wright playing a pass around the corner to send Grant clear on goal.

The Shelbourne backline was never likely to match Grant for pace and the former Bangor Celtic man sauntered through on goal before poking the ball past Colin McCabe.

Ian Morris’ side emerged for the second half a different side and took the game to their more celebrated opponents.

A string of chances fell the way of Ciaran Kilduff, Sean Quinn and Denzil Fernandes before Dan Byrne was awarded a penalty after being dragged to the ground by ex-Red Rob Cornwall.

Georgie Poynton took responsibility from 12 yards but his penalty was straight at James Talbot in the Bohs goal, and Kilduff couldn’t turn home the rebound.

Moments later, it was Poynton’s mistake that sealed the win for Bohemians, as he was caught in possession by Wright and (an offside) Grant finished emphatically.

Grant would save the best for last, stroking home calmly after McCabe had saved from Wright. Poynton did get on the scoresheet with a late header but Bohs held out for a comfortable win.

“Danny was disappointed not to make the Under-21s,” said Bohs manager Keith Long.

“I can’t see into the future and I don’t know if he’ll get called in on the back of Saturday night, with possible injuries over the weekend.

“It wouldn’t surprise me if he was drafted into the squad as he is on the standby list. But all you can do is perform when you are asked to do so.

“Danny responded to that disappointment really well. He has been excellent and he is coming on, his performances have been improving.

“There was a little dip in the last couple of games, though maybe that’s a bit harsh on him as he has been consistent since the restart.

“Adding goals to your game is very important for wide players, that end product in terms of assists and goals, and Danny got three on Saturday.”