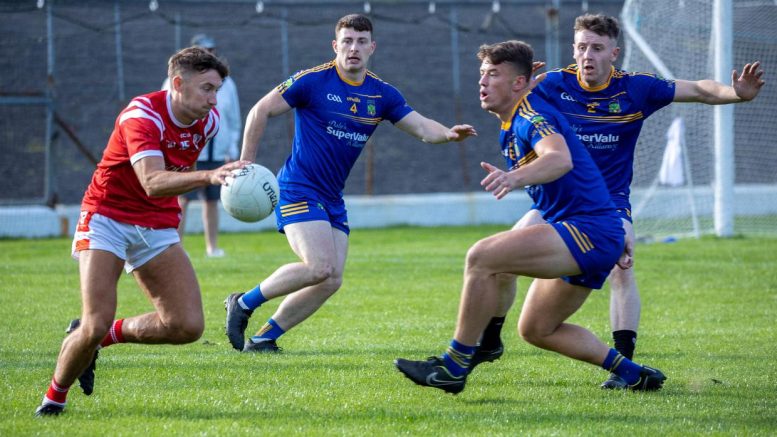 Seven teams will consider themselves winners already, having qualified for the County Senior Football Championship quarter-finals with a game still to play in the group stage of the competition, but the big loser next weekend will be the competition itself.

group stage format always carries the inherent risk of having much or all of its business done before the final round of games are played, and unfortunately only one group – Group 4 – carries with it any meaning into next weekend’s third round of games, and even then it will probably play out with little to no drama.

Unlike was the case in the recent club championships – Senior, Intermediate, Junior Premier and Junior – when almost every group across all four competitions went down to the final round of group games before the quarter-finalists were decided, the County SFC group phase will play out a series of dead rubbers next weekend.

Group 2 – the ‘Group of Death’ – is also a done thing: Dingle and East Kerry – with the latter going to the former next weekend –  are both through to the last eight, while Kerins O’Rahillys travel to play Spa in a game that carries no reward or hope of anything for either.

Reigning county champions, Austin Stacks, are also safely through to the quarter-finals, along with Mid Kerry, with both teams having four points from their first two games, and as such are uncatchable by either Na Gaeil or West Kerry, with the 2021 Intermediate champions, Na Gaeil, going back west to play West Kerry next week in a nothing game. Mid Kerry will welcome Austin Stacks to a local venue – Milltown the most likely, though Killorglin, Beaufort or Glenbeigh will be just as willing to host – with nothing bar top spot to play for.

Group 4 is the only ‘live’ group going into next weekend’s third round of games, and even at that just one quarter-final spot is available. Feale Rangers – the competition’s bolter so far – have qualified for the last eight by virtue of this afternoon’s impressive win over South Kerry in Listowel. Behind them are Templenoe, whose win over St Brendans in Ardfert on Saturday, puts them on three points, one behind Feale Rangers and two ahead of South Kerry.

South Kerry host St Brendans (no points) next week and know they must win to have any chance of qualification. If they do they must hope that Feale Rangers beat Templenoe in Templenoe, which would leave South Kerry and Templenoe on three points each. Having played each other to a draw in round one, scoring difference will come into play, if it comes to that, and currently Templenoe are on +1 while South Kerry are on -6.

The only carrot for those already qualified for the quarter-finals – and in Groups 1, 2 and 3 the two already qualified play each other in round 3 – is that the group winner will be seeded and drawn against a second placed qualifier. Quite how advantageous that turns out to be remains to be seen, and with qualified teams likely to approach next weekend’s games with an eye of the quarter-finals two week later, it would be impossible to predict any of the group winners at this stage.

The County Final is scheduled for Sunday, October 30 with a replay (on Saturday, November 5) to apply if the teams finish level at the end of normal time.

Meanwhile, East Kerry is understood to contest the red card James O’Donoghue received late in their win against Spa on Saturday. The Legion player was sent off on a red card for what seemed like a loose elbow that caught his opponent, and which is more likely to be reported as dangerous play rather than a strike or attempted strike.

An automatic one-game suspension would rule O’Donoghue out for next week’s visit to Dingle, for a game between two teams already qualified out of Group 2 for the quarter-finals. Nevertheless, the indications are that O’Donoghue will seek a hearing with the CHC to get the suspension overturned.