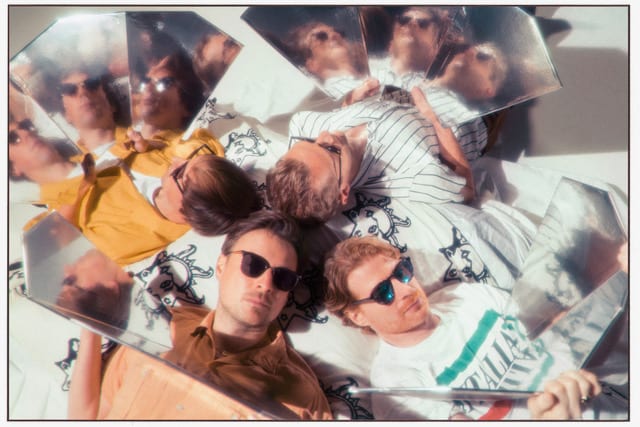 Indie icons Django Django’s latest album ‘Glowing In The Dark’ is loaded with musical undertones, it’s meaning portrayed subtly in the descriptions of its title.

Due on February 12, it’s crammed with nuance and clever constructions, typical of the indie act’s broad approach to music and thought-through twists.

Django Django have always rebelled against the musical norm. Their music seems to morph from record to record, with limited discernable themes, and plenty of exploration.

They get vocally frustrated with delays between writing and releasing records, and they’re not afraid to express their disappointment with how some of their early work turned out.

In fact, their leftfield approach to music is something that gains and loses fans in a hurry, but keeps them utterly compelling.

“We don’t really take time off, we finish a piece and we’re onto the next one,” Derry frontman Vincent Neff says when I call him in his studio. “We finished the album just before lockdown. It was scheduled to come out before summer, but we pushed it back to ‘when things had calmed down’. So much for that.”

“We wrote ‘Glowing In The Dark’ in 2019, and Trump was riding high on a litany of destruction, Brexit was a disaster, it had potentially looked like we might be able to remain. Then the hardliner elements got in. It looked quite bleak, I suppose. By the end I just couldn’t listen to it anymore, so I went into my imagination for how things could be, how they could be better.”

“It became slightly more political, with a little bit of angst holding things together, I guess. It’s quite nice to hear tracks like ‘Blackbird’ [by the Beatles], tracks that are quite covert. They have this collision of a mood in the lyrics and a brightness in the music. That kind of grabs us in a lot of music we listen to.

“That’s always been a kind of underlying sense of the music, and it’s really come to the fore in this one.”

The album might be a pre-lockdown effort, but title track ‘Glowing In The Dark’ has a real corona-times vibe. “It was a nice break from being in the studio,” Neff explains. “It was filmed in this industrial estate round the back of my house, with a camera, tripod and speaker.”

“I had some loose direction from the editor, who’s a visual artist in New York, and I’d record it, he’d make comments, and then he’d ask me to do more and so on. I couldn’t believe the results he got from me on my own with my phone against this brick wall.”

There are lots of clever little tweaks on the album, too – little playful extras like orchestral moments, or applause between one track and another (the record wasn’t recorded live).

“When we listen to Outkast, they do these asides, people telling stories, skits, stuff like that,” Neff explains. “It makes it a rich thing, full of inspiration for the more formed songs. We’re trying to get into that more, we love those moments.”

“Even the doorbell on the album, it’s just kind of a palate cleanser, getting people ready for the next piece of music.”

“It’s not going to make things easy live,” he laughs, “but for us recorded music and live music are separate entities. We have that luxury in a record studio that helps bring all those things in. But we always know, in the back of our minds, that we have to reproduce a version of it with four people on a stage. Audiences are never going to get the recorded versions verbatim. That’s the way we want things.”

Django Django’s ‘Glowing In The Dark’ is out on February 12.