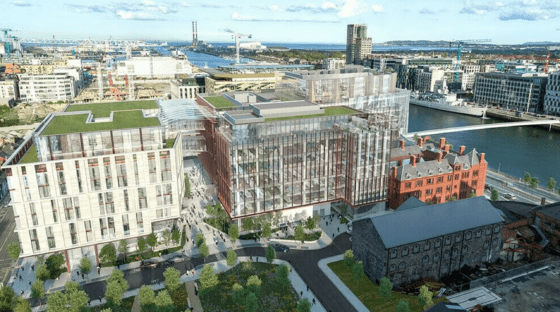 Developer Johnny Ronan is proposing to sell 101 apartments to the city council for an estimated €67million for social housing.

The Ronan Group has put forward the deal as part of its plans to build the tallest building in the country in Dublin’s Docklands.

The suggested package includes one 86sqm two-bedroom apartment at an estimated cost of €964,030 to the council.

The estimated costings are contained in planning documents lodged with An Bord Pleanala under fast track Strategic Housing Development guidelines.

The application outlines the Ronan Group’s €667 million plan to construct 1,005 apartments in the Docklands.

The Ronan Group and Colony Capital want to build three buildings – one reaching 45 storeys high and a second 44 storeys high – on a 2.6-acre site at North Wall Quay.

The plans include a public ‘sky’ bar and function room located at level 44 of one of the blocks while a public viewing deck will also be provided at levels 44 and 45.

As part of the applicant’s Part V obligations to provide 10% of the development towards social housing, the Ronan Group has put a price average cost of €660,358 on each apartment to the City Council.

Planning documents lodged with ABP are accompanied by a four-minute promotional video for the aspirational scheme.

It claims the “landmark” development completes what will be a bustling dockland area where more than 20,000 people will live and work.

It states: “And it will happen… they always make it happen. People will live there, make futures there… it is going to be incredible.”

The scheme, Waterfront South Central, will “stand at the gateway to Dublin’s Docklands, showing the city how much it has achieved” according to planning documents.

The final cost of Part V social units to the council will be subject to negotiation should planning permission be granted for the contentious scheme, with one-bed units potentially costing from €419,000 to €637,000.

Johnny Ronan states in the planning application that “Dublin needs to grow responsibly to meet future demand for a growing population and a growing economy”.

He adds: “This means creating projects that are additive to the city, that the city is proud of, that are attractive to a growing, younger population and that can be symbols of what Dublin stands for.”

A decision is due on the application some time in May 2021.