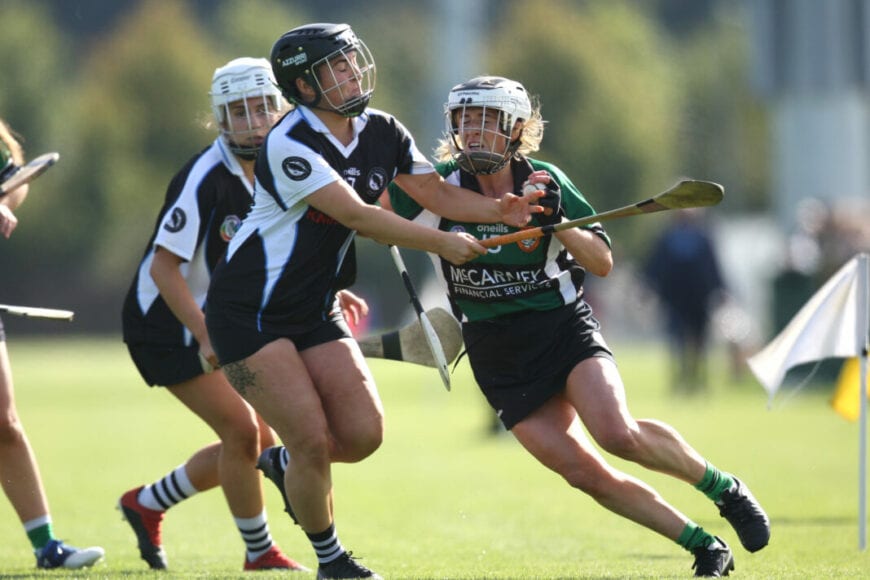 Erin’s Isle won a one-point thriller at Abbotstown underneath on a glorious autumnal day, edging out Naomh Peregrine to land the intermediate championship crown.

A cross wind was present but negligible as Isles set out their stall immediately with Gillian McCluskey winning a free which former Dublin star Louise O’Hara duly landed for the lead in the opening seconds.

Peregrine’s, though, also did not take long to settle and they were on the board from the puck-out with Niamh Heffernan – who lined out in midfield next to her twin Aoife – gathering, exchanging passes with Rachael Brennan, before landing her side’s first score.

And so it went back and forth with O’Hara restoring the Isles lead with a steady score which was augmented by Lynn Devoy’s strike from a very tight angle in the corner.

Devoy tacked on another but Peregrine’s were right back in the mix when the Heffernans went on the rampage, splitting the Isles defence wide open – Brennan finished it off, slamming a goal into the back of the net.

Devoy was metronomic, though, with her third point ending the first quarter while both McCluskey and O’Hara registered scores once more along with one each from ex-Dublin minor Cassie McEvoy and Jasmine Lowe, leading to a narrow 0-8 to 1-3 half-time lead for the Finglas club.

The Blakestown side were determined to turn things around in the second half and they made a good start courtesy of Aoife Deegan getting under a clearance and returning it over the bar.

The battle for possession rages on in midfield and Devoy entering the fray wins a crucial free – Megan Thomas converts it to a point.
Again, Peregrine’s were quick to fire back as a long puck-out found Aoife Heffernan and a deft lay-off saw Aoife Deegan rattle the net for a second goal.

Crucially, though, this ferocious and exciting passage of play saw Isles rack up a further goal and two points with Peregrines claiming two points to leave the score at the water break Isles 1-11 Peregrines 2-6.

O’Hara was fighting like a lioness for possession and won a free which Sarah Langan scored. McEvoy scooped up the puck-out and found McCluskey and another point was on the board for Isles.

Deegan cut the gap to three with a point and Niamh Heffernan nailed another couple of points to make it level with 29 minutes played in the second half.

Isles’ backs were under serious pressure now but O’Hara dropped back superbly to work the ball up through the half forward line to find Thomas who won the crucial free.

No room for nerves with the dreams of the team resting on her shoulders she squares up and it’s over the bar.

The whistle blew-up a minute later and Isles erupted with joy.