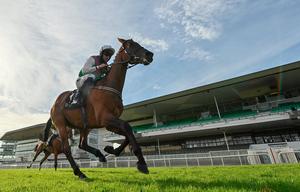 Aramon gave the father and son combination of Willie and Patrick Mullins a second Guinness Galway Hurdle success in three years with a fine weight-carrying performance in the Ballybrit feature.

he seven-year-old looked a class act as he followed up his triumph in the Grade Three Grimes Hurdle from five weeks earlier, having been second in the County Hurdle at Cheltenham in March.

Sharjah, the winner for the Closutton team in 2018, has gone on to show he is better than a handicapper and Aramon too could do the same after running out a ready winner.

Aramon, with Patrick Mullins up, on their way to winning Guinness Galway Hurdle Handicap on day four of the Galway Summer Racing Festival at Ballybrit Racecourse in Galway. Photo by Harry Murphy/Sportsfile

Aramon, with Patrick Mullins up, on their way to winning Guinness Galway Hurdle Handicap on day four of the Galway Summer Racing Festival at Ballybrit Racecourse in Galway. Photo by Harry Murphy/Sportsfile

The 7-1 chance was brought with a perfectly-timed run to challenge before the final flight and scooted clear from there to win by two and a quarter lengths from Hearts Are Trumps, with Petit Mouchoir in third and Olly Murphy’s British raider Hunters Call fourth.

RaceBets halved Aramon in price to 20-1 for the Champion Hurdle, and the winning rider said: “He has to be a Champion Hurdle horse after that. He was a very good novice and a bit like Sharjah lost his way then, but his run off top-weight in the County and to win off top-weight here – it looks like he’s getting his mojo back.

Jockey Patrick Mullins celebrates with handler Rachel Boyd after victory in the Guinness Galway Hurdle Handicap on Aramon during day four of the Galway Summer Racing Festival at Ballybrit Racecourse in Galway. Photo by Harry Murphy/Sportsfile

Jockey Patrick Mullins celebrates with handler Rachel Boyd after victory in the Guinness Galway Hurdle Handicap on Aramon during day four of the Galway Summer Racing Festival at Ballybrit Racecourse in Galway. Photo by Harry Murphy/Sportsfile

“That could put him up to 160 which puts him within 3lb or 4lb of the top horses in the land. I’d imagine it’ll be Grade Ones from now on.”

He added: “He had 3lb more than Sharjah and that was good news for me – those big weights.

“The race was run to suit him, the fact that it was good ground and they went steady. With a real strong gallop the weight would have told a bit more.

“He’s better on good ground. He could be a horse for Far Hills in America, but maybe in a year’s time.”

Trainer Denis Hogan announced he was giving up riding after steering Bua Boy (5-1 favourite) to victory in the Arthur Guinness Handicap Hurdle.

The County Tipperary handler went out on a high by saddling the first two home with his mount beating Alabaster by two and a quarter lengths.

“I’ve really enjoyed it and it’s hard to let go,” said Hogan, who is rapidly making his mark in the training ranks with the likes of smart sprinters Sceptical and Make A Challenge.

“I have more things going on nowadays. It’s gone so busy at home and there are days when I can’t think what’s going on as there is so much happening. I wouldn’t even know I’m riding sometimes.

“It’s going so well. The only reason I could do this so long is because I’ve got such a great team at home. I couldn’t have stayed riding for so long if I hadn’t had that back-up behind me.

“My parents have been a massive help. I talked to them once or twice about doing this and they said keep doing it if you enjoy it.”

He went on: “I thought he could win, but you never know until everything goes right in the race. I thought if ever there was time to go and leave the job, it was here at my favourite track.

“I had a good career, I wouldn’t say outstanding but I rode lots of winners and this was probably my Cheltenham.

“I’m happy to concentrate on the training job now. We have a lot of good Flat horses.

“It was my decision and I’m looking forward to the future now.”

Polished Steel, with Robbie Power up, clears the fourth fence on their way to winning the Rockshore Novice Steeplechase on day four of the Galway Summer Racing Festival at Ballybrit Racecourse in Galway. Photo by Harry Murphy/Sportsfile

Polished Steel, with Robbie Power up, clears the fourth fence on their way to winning the Rockshore Novice Steeplechase on day four of the Galway Summer Racing Festival at Ballybrit Racecourse in Galway. Photo by Harry Murphy/Sportsfile

Polished Steel made it two from two over fences when taking the Grade Three spoils in the Rockshore Novice Chase.

Successful at Tipperary four weeks ago, Jessica Harrington’s six-year-old made all the running in the hands of Robbie Power.

His task was made easier when Russian Diamond, the 11-8 favourite, parted company with David Mullins at the sixth fence.

Polished Steel (9-2) jumped well in the main apart from a mistake at the second-last and pulled away on the long run to the line to win by nine lengths from 100-1 shot My Manekineko.

“He was very good. There was a long conversation in the yard this morning about whether to run or not on the ground,” said Power.

“He’s a much better horse on good ground, but it didn’t look the strongest Grade Three contest. It looked a good opportunity for him so we decided to take a chance.

“His jumping is his main attribute. Even at the second-last we were rolling down the hill, and I was longer than I ideally wanted to be, but we had to keep the revs up and he came up.

“He was never going to lie down on me, he’s a fighter.”