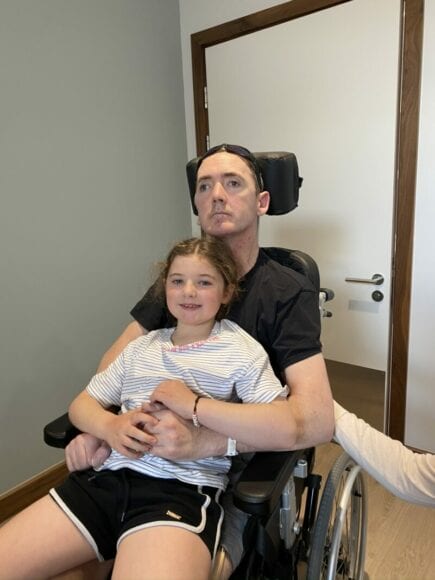 The family of a Dublin man who suffered a brain injury in a horror biking accident is trying to bring him home to give him the best chance of recovery.

Dad-of-two Des Vallely from Monkstown has been in hospital since January 8 and has only seen his kids Daniel, 12, and nine-year-old Ella Rose three times due to Covid-19 restrictions.

The 51-year-old is due to be released from the National Rehabilitation Hospital next month – and his wife Tara Dalton is desperate to get him home rather than see him go into a nursing home.

She has launched a GoFundMe campaign and hopes to raise e400,000 which will cover the cost of home care for Des for the next two years.

Tara told Dublin Gazette: “Des was in a coma for 10 days, in ICU for two weeks. He had a tracheotomy.

“Initially, I told the children he’d be home in four to six weeks which to them was forever. Because of Covid, it was six months before they saw their daddy again.

“Covid introduced another layer on top of an already awful situation. We worried that he might catch Covid, and still we didn’t know the full extent of his brain injury.

“The doctor advised that it could take two to three years for recovery, but he had seen someone like Des recover before.”

Des underwent hours of surgery and half of his skull was cut away to allow the brain to swell, as there had been two large bleeds, and he was hooked up to life support.

Brain damage has caused high muscle tone, so Des is stiff but now he can lift a cup slowly to his mouth. It may be slow but every achievement is a milestone.

Tara revealed that when Des was transferred from Beaumont Hospital to the NRC he was put into bed for a month because of an infection.

He regressed, and without visitors every day he stopped whispering or trying to speak.

She said: “Eventually I was allowed in and immediately his mood lifted. He’s terribly lonely, so I know it’s the right thing to do.”

Tara said when Des eventually got to see his children he “lit up for about 20 minutes”. She is now resolved to making her ‘Walk Des Home’ campaign work.

The couple run Irish Village Markets, a company managing street food markets that Des built from scratch. Tara said: “I would describe Des as a doer, a fantastic dad, a great husband, very outgoing, full of life and so very driven.”

The fund is more than half way there with generous donors raising e225k so far. To donate visit the GoFundMe page here.

CSO report that prices have fallen by 0.4% this July