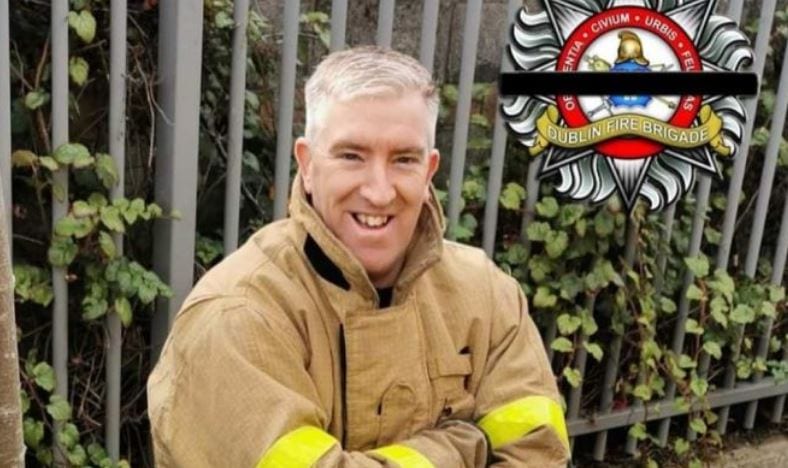 Paula McLoughlin’s world fell apart on April 6 when her beloved husband David died suddenly at the age of 37.

A fit and healthy man, he was an avid walker and cyclist and a member of Dublin Fire Brigade.

It was not Covid-19 that claimed David but after being struck ill suddenly, he was rushed to Beaumont Hospital where he was treated tenderly for three days.

These were days that gave his heartbroken family, including his 13-year-old daughter, time to say goodbye.

Paula told Dublin Gazette: “Already under additional pressure during the pandemic, we are eternally grateful to all the nurses, doctors and staff there, along with his own colleagues in Dublin Fire Brigade who worked tirelessly on David and gave us those three precious days with him to say goodbye.

“A huge hole has been left in our lives with David’s sudden passing; his death was felt by so many. That’s just how adored he was.”

Paula is now planning a fundraiser for hospital staff in memory of her Dublin firefighter husband and the event has garnered huge support.

She said: “This fundraiser in September has been set up in his honour, to raise funds for Beaumont Hospital.

“Along with his fire service crew, I am doing the cycle for David, with his dad Jack, brother Paul, uncle Patrick, cousin Keith and sister in law Clare.”

Ironically the day David was buried, April 9, was the original date he and his fellow crew members of C Watch No 5, Finglas Station, had planned to do a 100km cycle in Athlone.

Sadly, that day Paula and the extended McLoughlin family and Dublin Fire Brigade were saying a final farewell to David.

“He was such a fit and healthy guy, it was a shock to all of us,” said a heartbroken Paula. “When not working, he was usually found in the gym, cycling or walking his beloved pooch, Blondie.

“The cycle will take place on Thursday 24 September – which should be David’s 38th birthday – a fitting tribute to him, and to all the staff at Beaumont Hospital for their kindness.

“Any donation big or small will help other families and patients during the toughest time of their lives so thank you, in advance, for your generous donation,” concluded Paula.