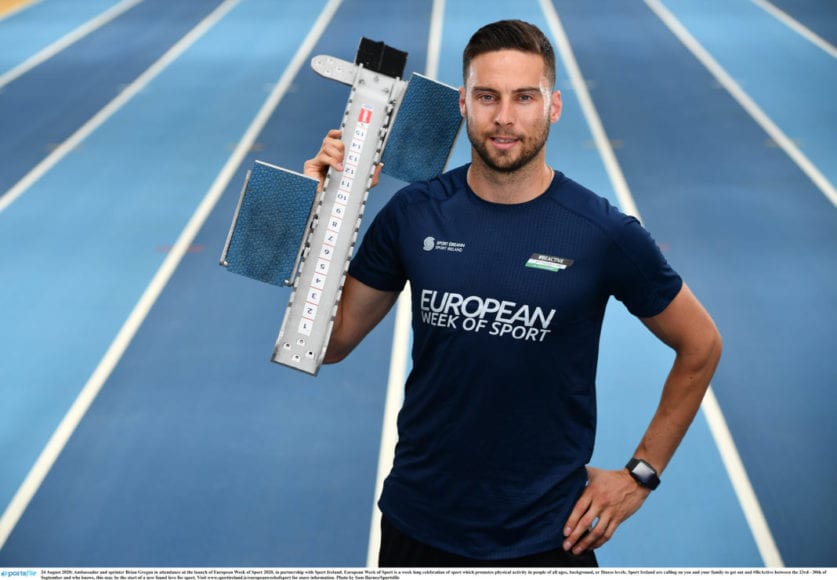 Olympics hopeful Brian Gregan admits the lockdown taught him a valuable lesson about his ‘obsession’ with qualifying for the Games.

His dream remains to make it to Tokyo 2021 – though he’s able to put it all in perspective now.

“Yeah, it’s still my dream but lockdown taught me that it was actually too much of an obsession and that when you get too clued into something it can be a negative,” said Gregan at the launch of the European Week of Sport.

“Obviously you need to focus everything you have on it but sometimes you become too obsessive with it and that brings stress and anxiety with it.”

The Tallaght AC man missed out on Rio 2016 after being ‘wiped out’ by a mystery bug that attacked his system after pushing too hard in training.

“Again, it was probably that obsession with the Olympics that cost me an Olympic spot,” he said. “I was doing absolutely everything I could possibly do to get on that team, overtraining and undereating, because with athletics you need to be pretty much as light as you can but also as powerful as you can. Unfortunately I took that a little bit too far and underate and overtrained and just completely got wiped out.

“I got away with it for a while and then bang! I woke up one day and my resting heart rate, which was normally in the low 50s, high 40s, was about 70 beats per minute, I couldn’t walk 100 metres without my heart rate going well over 130, 140 beats.

“A lot of tests didn’t show anything, in and out of hospital, and eventually I came out of it, I think it was May or June time. My energy came back and I started to race and stuff like that. But I’d missed two or three months of a key time to try to train and qualify.”

Dubliner Gregan missed this weekend’s national championships in Santry due to injury but has learned to be mentally strong with such knockbacks.

“I’ve gone through a lot but I think the couple of injuries and stuff like that, it teaches you to be very self reliant and to have that strong mental edge,” he said. “I work with Kate Kirby, a psychologist and she has taught me a lot of stuff but I’ve picked up a lot myself too, just being resilient and that’s probably the biggest thing.”

Ambassador and sprinter Brian Gregan was speaking at the launch of European Week of Sport 2020, in partnership with Sport Ireland. European Week of Sport is a celebration of sport which promotes physical activity in people of all ages, background, or fitness levels. Sport Ireland are calling on you and your family to get out and #BeActive between the 23rd – 30th of September and who knows, this may be the start of a new found love for sport.