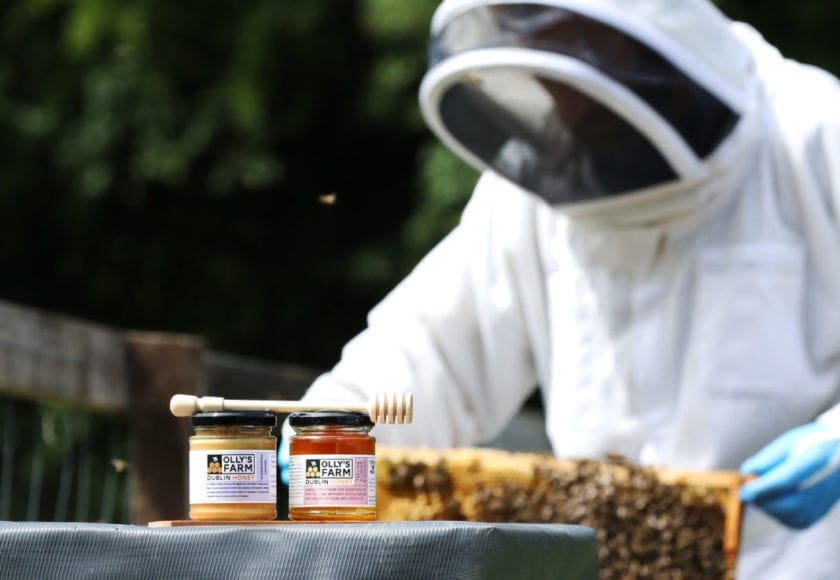 WITH so many small businesses badly impacted by the spread of the coronavirus, Dublin-based beekeeper Olly Nolan found his honey business was absolutely buzzing.

Olly started beekeeping in 2012 and since joining the SuperValu Food Academy in 2016 his farm honey has become a firm favourite with customers.

Landscaper turned farmer Olly, originally from Killiney in south Dublin, supplies stores near his farm in the Dublin mountains, along with several leading tourism centres.

Over the last three months, sales of locally produced products have soared in SuperValu stores as customers chose to support local businesses such as Olly’s.

In 2012, Olly and his partner Christian bought a smallholding in the Dublin mountains, in the Valley of Glenasmole just a five-minute drive from Tallaght.

There they set themselves up to be as self-sufficient as possible while combining it with modern living. Hence Olly’s Farm Honey was born.

“We are only 20 minutes from Dublin’s social scene yet we are in a rural haven here in the valley,” Olly told Dublin Gazette.

“We have 8.5 acres in total and produce up to 90 per cent of our food needs; we grow our own fruit and vegetables and we have hens to provide eggs.

“There’s an orchard here with 60 fruit trees and we keep a few pigs every year plus a small herd of Irish Dexter (native breed) and one dairy shorthorn, ‘Vesta’ whom we milk daily.

“And yes, all our stock has names – even the pigs who will end up in the freezer; last year’s were called Thelma and Louise!

“We know where every animal we eat comes from, and we’re not eating mass produced meats from intensive farmed operations.”

Olly’s pigs and hens are outside rooting in the dirt, unlike so many pork or poultry who never see the light of day in intensive farms and battery hen operations.

He said: “At the end of the day, it’s the consumer’s choice and when consumers opt to buy cheaper meats and eggs, intensive farming will continue – it is often a matter of what the consumer can afford.”

Olly has some hives in  South West Dublin, which supplies to SuperValu in Lucan; from Ballycullen, (D22),  his honey is stocked at SuperValu in Knocklyon and Firhouse.

In Co Wicklow, his hives are located at Teeling Whiskey Distillery (D8) and sold at the gift shop but also used for cocktail specials including one named ‘The Beekeeper’.

“We’re chuffed to have our own cocktail named after us,” he says of the signature tipple which combines honey and lemon with Teeling’s finest whiskey.

Throughout the coronavirus crisis, Olly has been able to continue producing honey and sales have not only remained strong, but increased during the pandemic restrictions.

“Not much changed for me during lockdown,” added Olly. “It was just the bees and I; I tended perhaps to deliver the honey earlier in the morning to avoid consumer contact.

“The end consumer is becoming more conscious of health produce and increasingly choosing an organic or home grown produce. Many people commented they hadn’t tasted honey like ours for 30 years, since they were a child.

“Honey is one of the most ‘fraudulent’ foods in the world along with olive oil and milk.  So many companies import honey from Europe and relabel as 100% Irish produced honey. Read the small print.”

On his experience and the benefits of joining the Food Academy, Olly said; “The support I have received from SuperValu since I started the Food Academy programme has been fantastic.

“The programme gave the business a real boost and we’ve gone from strength to strength thanks to the support and guidance from SuperValu.

“We have a really loyal customer base and we even get messages from customers telling us when their local SuperValu is out of Olly’s Farm Honey.

“We’ve no regrets whatsoever since we undertook our self-sufficiency adventure.”

Loving Local: Getting back to business with Blanchardstown Credit Union