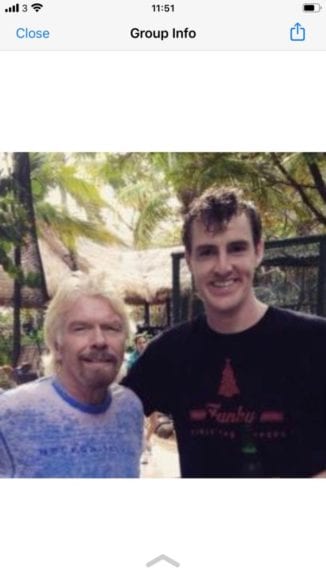 Swords man James Cluskey is an ex Davis Cup tennis pro who was ranked 145 in the world. Here he tells Dublin Gazette how he set his sights on coaching Richard Branson… and made it happen

As a child tennis star James Cluskey was terribly shy. Little did he imagine that one day he would be a Davis Cup Pro, a Guinness World Record holder and personal tennis coach to one of the world’s most famous billionaires.

Since 2015 James has been flying over and back to Necker Island to put aviation mogul Richard Branson through his paces on the tennis court.

Now at 33 he has added another string to his bow, and has just published his first book ‘Advantage: Lessons from Sport and Business to Achieve Your Goals’.

James, from Swords in north county Dublin, has shared his secrets for success – both on and off the court – and credits his mother for encouraging him to chase his dreams.

He revealed: “I had a vision in my head that I would love to meet and work with Richard Branson as I admired his energy, tenacity and saw him as a decent sort.

“I worked hard to make this dream a reality and so I met Richard in 2015 and it just worked. I regularly fly out to Necker Island to act as his personal tennis coach.

“He is a joy to work with. He has an incredible zest for life, is friendly and very generous – and just kind. He treats people as he likes to be treated and I really respect that in any person.

“I have learned so much from him, I suppose I don’t look up to people generally and that keeps things nice and level.”

James is a sought-after coach and movitational speaker whose motto is ‘surround yourself with good people’; one that has stood him in good stead thus far in life.

He said: “Encouragement and support are really important for human beings. At the end of the day we all need people in our corner; people who we know will be genuinely happy for our achievements and equally happy to tell us that we might be on the wrong road.

“I have seen people blossom with a bit of support, both in my tennis and business careers and it is just wonderful to see them transform and reach their potential.

“The truth is most people aren’t fulfilling their potential – they may be unclear on their goals and even when they do know what they want to achieve personally and professionally life throws up obstacles and gets in the way.

“Advantage is a guide for anyone looking to get to grips with their life goals and vision and perform at the top of their game in life, in sport, in business– learn the secrets behind setting yourself a challenging goal, then persevering, adapting and improving until you achieve it.”

James believes success in sport and business are interchangeable and a lot of the same structures apply – from setting goals to making lists, targeting small wins and keeping your aims to the forefront of your mind.

Coronavirus has thrown up challenges for the affable Dubliner who says that it has been a learning curve for him and he has learned lifetime lessons.

He explained: “I firmly believe that we can all learn from the Covid pandemic. It’s hard to set long term goals at the moment given the times we’re living through so set short term goals which you can achieve.

“This will give you more confidence and as we all know nothings succeeds like success. The lockdown has really given me time to think and I have taken three things out of it for business.

“Take time out daily and set your vision for the next month ,list out your daily goals and most importantly of all, again find that ‘accountability partner’.

“I passionately believe in having what I call “an accountability partner”, somebody who will almost keep a ‘close eye’ on you and call you out if you’re not sticking to your plans and goals.

“My Publisher was mine while I was writing Advantage.”