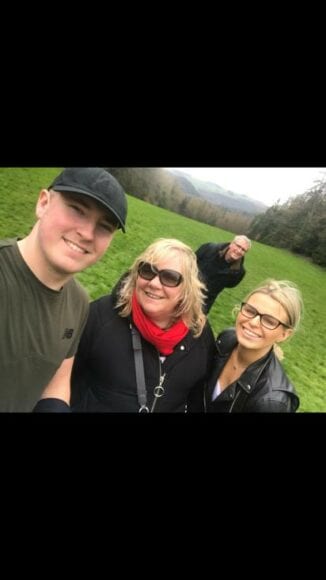 The King family are a normal, healthy family, but Covid-19 found its way into their lives on December 30, 2020 with shocking consequences.

Jackie King, 52, remembers waking up on New Year’s Day, 2021, in their new house in Killiney and a few hours later watched her husband, Johnny, collapse on the floor in a convulsion.

The 57-year-old was admitted to St Vincents Hospital and spent the next two days in a Covid ward after testing positive. He says he will never forget the experience of being in the ward.

He was deeply affected from hearing other people gasp for breath, call out to their loved ones and he was scared to death that he would also become another Covid statistic.

After returning home, he continued his fight with the virus for a further four to seven days. The tests he received in St Vincent’s confirmed his seizure was Covid related after his temperature had escalated.

Meanwhile, Jackie started feeling unwell, her symptoms were similar to a normal January cold at first and then by day six, it all intensified.

She said: “I have never experienced anything like it. My body was continuously aching, I felt constantly nauseous, I had zero energy. It completely floored me and my family.”

Their 25-year-old son Dylan and his girlfriend also contracted the virus and isolated for the recommended time of 14 days. They have all said that they felt it took two days before the symptoms arose.

All members of the family said that they experienced a two day period where they thought they were at deaths door. It completely floored the family, and now even after recovering, they still feel exhausted and not back to complete good health.

Ms King wants people reading this to know there are so many symptoms to look out for and each person in her family aged between 25-57, all healthy, were completely bed ridden for nearly three weeks.

Even though Mrs King was not admitted to hospital she said, “It doesn’t mean you have a mild version isolating at home, mine was extremely severe.”

The King family will never forget their experience fighting this deadly virus. Jackie wants to share her story of having Covid and isolating at home, for people to see how dangerous it is and to adhere strictly to the government recommendations.

Tributes flow in for Clonliffe’s Jerry Kiernan, an enduring athlete

€213m to be spent on homeless services next year in Dublin