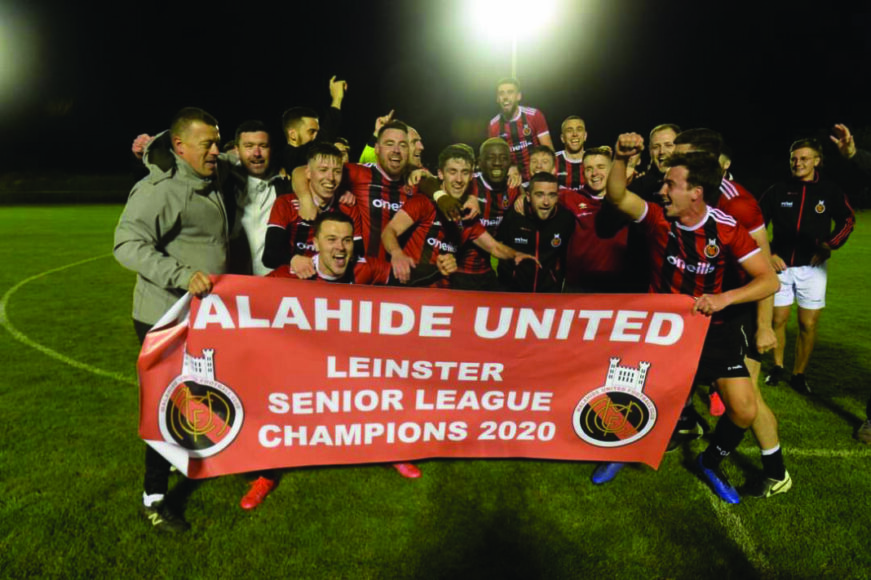 Malahide United are Leinster Senior League champions for the first time after they edged St Mochta’s to the title following an epic, 14-month season.

The north County Dublin side went into their final fixture with Newbridge United knowing a win of any sort would be enough to clinch a historic league title.

That they more than did with an emphatic 5-0 victory ensuring Gerry Coughlan’s side sauntered to arguably the crowning achievement of the club’s illustrious 76-year history.

A brace from Cillian Timmons and one each from Cillian Thompson, Jamie McGlynn and Jordi Ebanda ensured a comfortable win on home turf.

The result ensured they avenged their FAI Intermediate Cup semi-final defeat to 2016/17 champions Mochta’s by taking home the prize chalice of intermediate football in Leinster.

Malahide have led the league almost from the outset and went into the game knowing three points would be enough to seal the title.

Mochta’s surprise defeat to Liffey Wanderers and a tough 2-2 draw with holders Crumlin United left Malahide’s fate entirely in their own hands.

A 5-0 win over Killester Donnycarney – whom Mochta’s beat to lift the Intermediate Cup in Tallaght – set up the potential of a final-day bonanza against relegated Newbridge.

The only shame was that there were no supporters, beyond the fortunate few club officials and volunteers, allowed in Gannon Park to enjoy the festivities first-hand.

Had they been allowed in, they wouldn’t have had to wait long to see the red and black take the lead as Timmins found the net within the first seven minutes.

Thompson added goal number two midway through the first half and former St Patrick’s Athletic and Shelbourne midfielder McGlynn added a third before the break.

Timmins bagged his second late on before the ex-Dundalk striker Ebanda put gloss over gloss in the dying minutes with the fifth and final strike.

And there’ll be a west Dublin flavour to the top flight in 2020/21 as both Sacred Hearts Firhouse Clover and Kilnamanagh ensured their promotion to the top level.

Perhaps just as significantly, the final promotion place was secured by Home Farm at the expense of Lucan United, the Whitehall grandees back after four years in the second tier.

Mooney and Carroll on crest of a Wave at DLR