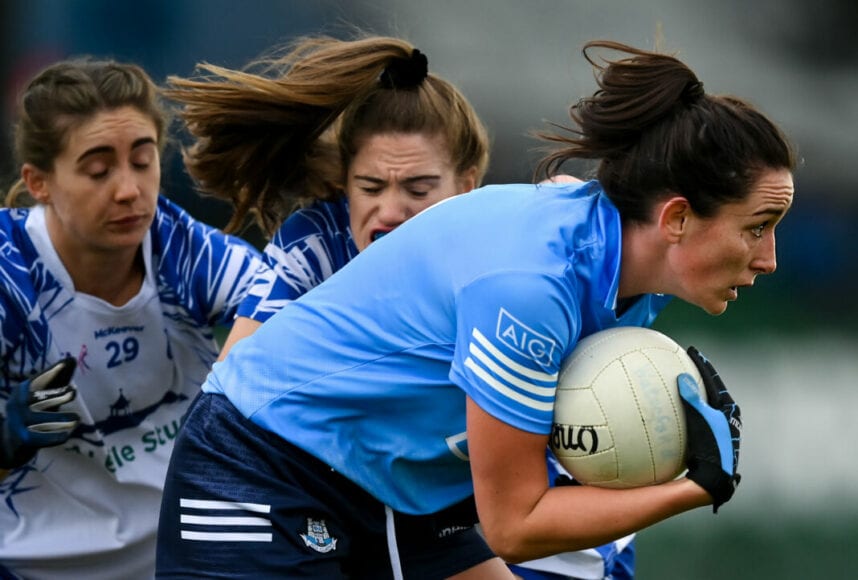 Eyeing her fifth All-Ireland title, St Sylvester’s Niamh McEvoy feels there is a very real of passing on her know-how to the next generation.

Now 30, she came off the bench in the breakthrough 2010 final – as did Noelle Healy – raw, enthusiastic off the back of a remarkable youth career in sky-blue.

The new breed, though, are quickly assimilating with the likes of Kate Sullivan, Caoimhe O’Connor, Sarah Fagan and Niamh Hetherton making quick strides up the ranks.

Minors in 2018, each have senior medals in their cabinets and McEvoy says they are quickly evolving into vital cogs in the panel.

“I was talking to Kate Sullivan, a club-mate of mine, she came on against Armagh in the semi-final and had a really impressive performance. I said to her that in 2030 she’d be in the position I was in in 2010, so it’s quite strange to think about it like that!

“We have some absolutely wonderful young players coming through – Caoimhe O’Connor, who gave an amazing account of herself in the championship last year, Kate – and more than keeping us on our toes, they’re putting us under a lot of pressure, these are really, really good players.

“They have learnt a huge amount from being involved in this group and with this management team. I think they have that game-sense that maybe me and Noelle didn’t have at their age.”

One experience McEvoy does have over the young brigade is of empty stadiums. While the final a decade ago had a healthy crowd of over 20,000, recent times have seen bigger and bigger numbers of more than double that, something Sunday will lack.

“Some of us older girls would be well used to playing in empty stadiums; it’s nothing to be worried about! I don’t think there’s any focus lost there, it feels absolutely the same.

“Croke Park has the best surface in the country, so we wouldn’t want to be anywhere else regardless of crowds or not.”

For the Sylvester’s forward, she is set to jet back out to Australia soon after Christmas to Melbourne to play in AFLW after her debut season was cut short in March by the pandemic.

The club was looking forward to a final four encounter with Fremantle at that stage, a frustrating to an engaging campaign.

“Even before that it was a big decision for myself and Sinead to go because we’re very invested in this [Dublin] group of players. Leaving such a special thing here, we wanted to give it our all went we got over to Australia, so it was disappointing not to get the opportunity to finish it.

“But Melbourne were so good in terms of having our best interests at heart, they sent the two of us home in advance even though they played a finals game and I’m sure they’d have liked to have kept their squad together. But they cared, just like Mick [Bohan] does here, about the players and less so the competition. We were lucky in that sense.
“I wouldn’t have gone to a club where there weren’t similarities to the group here. Gaelic football will always be my first love and the girls I play with are nearly like sisters at this stage.

“But there’s a huge level of respect in the Melbourne group as well, they obviously have that Dublin GAA connection through Jim Stynes, and when we were over there Brian Stynes was good to us, he had us over to his house a number of times. He talked to us about coming to the AFL from a GAA background.”

McEvoy adds that Irish players bring a huge amount of dynamism to the oval ball code which gives her and the likes of Sinead Goldrick and Lauren Magee an ex-factor.

“If you catch a mark over there, you [usually] stop straight away – if you did that here, Mick would kill you. It was drilled in to me and Sinead that when you catch the ball, you play on.

“So for them, that was very unpredictable, it created overlaps and so on, and scoring opportunities. Oppositions have come to expect that now when an Irish girl is playing, that she’ll play, she won’t stop!”

Such thoughts, though, are on the backburner for the timebeing as Sunday’s final takes centre-stage.

“Haha, no, I’m not practicing AFLW at the moment, my only focus is on Gaelic football and what’s in front of me this week. It’s completely at the back of my mind at the minute!”