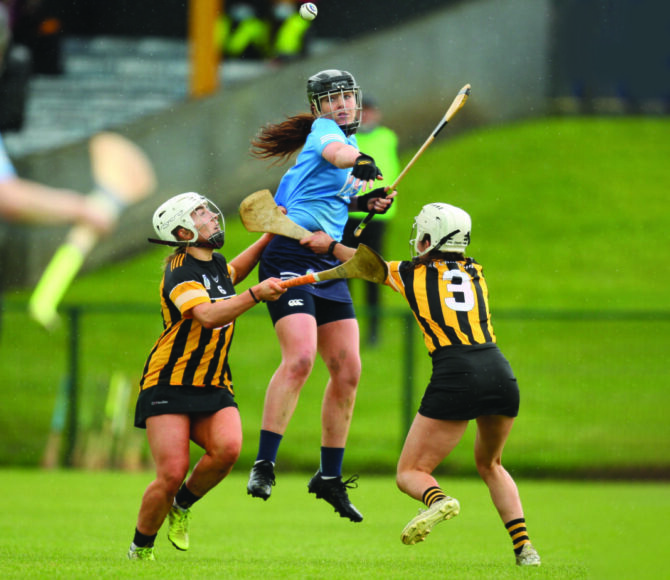 ADRIAN O’Sullivan’s new look Dublin side will take the positives from his first outing in charge of the county against All-Ireland champions Kilkenny on the opening day of the Littlewoods National League.

The sky blues had Faye McCarthy back in goal after a two-year stint away while Eve O’Brien was back in the fold at full-back after a year out.

There were four players starting, meanwhile, who had made their Dublin debuts in 2020, the Couch Twins, Jodie and Gaby, Muireann Kelleher in corner back and Aoife Walsh up front.

The cats started with 11 of their All-Ireland winning side and they got off to a fast start with Denise Gaule slotting over a free and Michaela Kenneally added another.

And they got the game’s only goal in slightly fortuitous fashion when Aoife Doyle’s strike bounced awkwardly in front of McCarthy and went into the net.

Dublin got on the board courtesy of Aisling Maher’s free when Grace Walsh – under pressure from Roisin Baker – over-carried.

But a couple more Kilkenny frees from Gaule extended their lead to 1-4 to 0-1 by the first water break.

It was a tight game for the remainder of the half as Dublin did not let the hosts pull away, matching up well physically.

Kerrie Finnegan was unable to make the most of an inviting goal chance but Aoife Norris did well to clear.

Kilkenny had a major disallowed for a handpass goal with the new rules meaning a free out.

Jody Couch completed the first half scoring, picking up the pieces after Norris denied Finnegan, 1-5 to 0-3 at half-time.

Maher, this time from play, cut the deficit to four points early in the second half when Orla Gray cut out a Davina Tobin attack, cleared the ball to the Dublin forwards who made the most of the opportunity.

McCarthy showed her value to keep with a couple of great saves but Gaule was on hand to add a great score after a good passage of play.

The wind was starting to pick up at this stage in the host’s favour but a second Jodie Couch point – probably the score of the game – from the right-hand sideline reduced the deficit to 1-6 to 0-5 with the game still alive.

But Kilkenny put an extra chink of daylight between the teams via Miriam Walsh and a Gaule 45.

Dublin finished strong as they went for goal but were unable to find the net with Aoife Walsh going close. Maher did land a 45 but it was too little too late.

The capital side will look to bounce back next weekend against Offaly on home turf at 2.30pm.