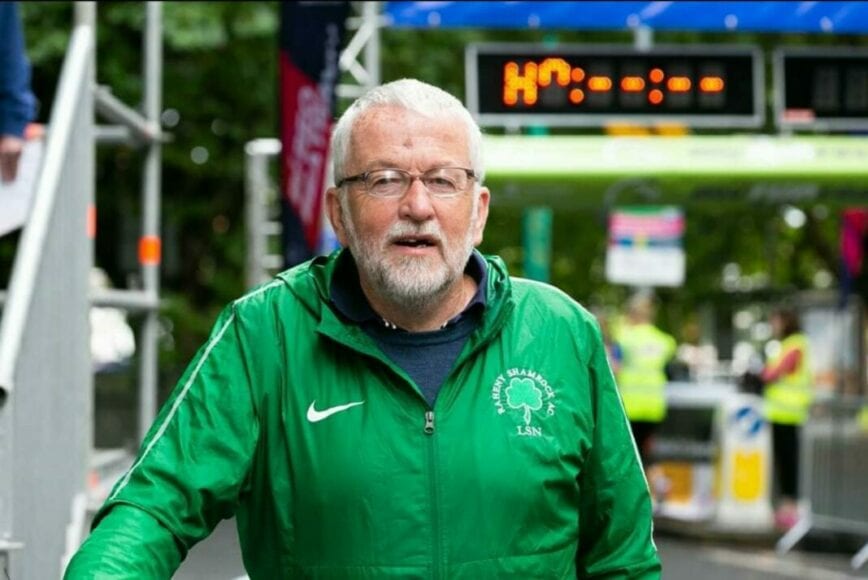 It took in representing Ireland at the marathon at the 1980 Moscow Olympics while he has been one of the most innovative and dynamic club men for many years, launching the Raheny 5 mile, the Lord Mayor Series and the Battle of Clontarf 10 mile.

He was also an active coach, passing on his wealth of knowledge to many an athlete, both young and old, in hopes they would succeed in their own athletics career.

Fellow club member Sean McGoldrick paid a fitting tribute to his friend on the Raheny website for his services to the club and the sport:

“Pat Hooper has now joined the great pantheon of runners in the sky. We in Raheny Shamrock’s have lost our leader, our coach, and our forever friend. The Jugger as he was affectionately known by his peers was the living soul of the club. His sudden passing has left us stunned and deeply saddened.

“Pat loved athletics but loved Raheny Shamrock AC even more. He often described himself as a self-made Olympian. He was the wrong size to be a marathon runner but through sheer grit, determination, and unbelievable dedication he made it to the Moscow Olympics in 1980.

“His training runs were legendary. He ran every morning from his home in Raheny to the old PMPA offices in Wolfe Tone Street and then made the return trip after his day’s work. This was back in the 1970s when it wasn’t fashionable to be seen running. One wet evening a well-meaning motorist stopped and offered him a lift. He was disgusted.

“While out a long run over the Hill of Howth, a group of us once tried guessing how many miles Pat logged during one of his heavy training weeks. We never got close to the correct answer – a mere 240 miles!

“He could have found a new hobby after his international running career was over. Instead he embarked on a different role in athletics which shaped a generation of runners who were fortunate to join Raheny Shamrock.

“He often told the story in his own inimitable style of being filled with ambitious plans when he got involved in the administration of the club. But he very quickly discovered the club was heavily in debt.

“Necessity is the master of invention and this temporary crisis inspired him to launch the Raheny 5 road race which will arguably be his greatest legacy.

“Not alone did he have an encyclopaedia-like knowledge of athletics, he also had a great feel for the sport. He was Chairman of the Dublin Athletics Board and was elected chair of Leinster Athletics at their last AGM.

“He was a founder member of the Business Houses Athletic Association which went on to organise the Dublin City Marathon.

“Pat was a happy and proud man when wearing the green and white colours of Raheny Shamrock whether it was overseeing another round of the Lord Mayor’s Summer series, coaching on the seafront in Clontarf or cheering home the senior men’s team when they finally won the National cross country title in 2016.

“Pat was instrumental in recruiting me to the club. He gave me a very generous handicap in the Jim Wall race in the summer of 1999. So much so I finished second. That was me hooked. He was a wonderful mentor and taught a cohort of members the rudiments of race organisation.

“We argued countless times during Raheny 5 committee meetings. But despite having our differences, it never impacted on our friendship. The word legend is often bandied about, but Pat Hooper was the real deal. We will never see the like of him again.

“Goodnight my friend and thank you for sharing your incredible life with so many of us.”

Mercy’s Hannah Thornton thrilled to get back on court