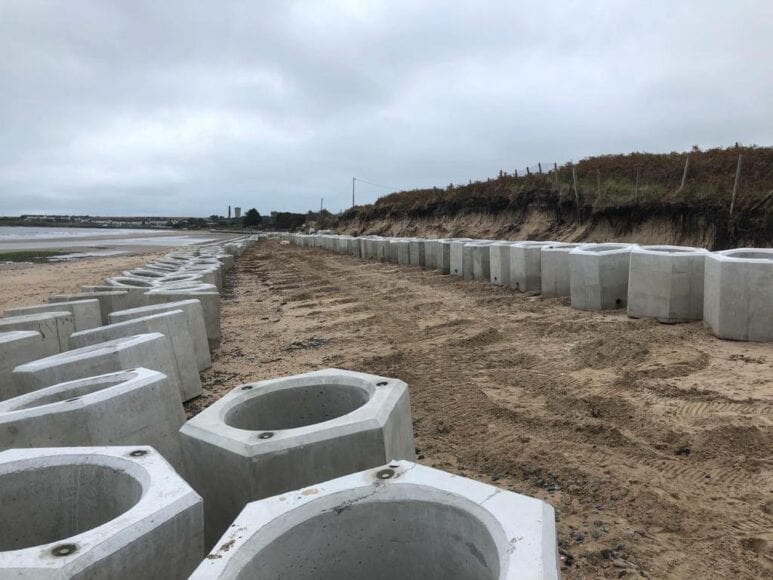 Fingal County Council has condemned the removal of part of the coastal erosion defence system at Burrow Beach, Portrane, by unknown individuals over the weekend.

The council have said they are ‘shocked at the reckless damage caused to the dune system in an environmentally sensitive location’, which is designated as a Special Protection Area.

Using heavy duty machinery, up to 70 Seabees, each weighing 1.5 tonnes, were removed from the line installed by the Council this summer. The Seabees were then placed at the foot of the sand dunes near Beach Lane damaging the current dune system in the process. The Gardai and the National Parks and Wildlife Service have been notified of the incident.

A 1km line of nearly 1,000 ‘Seabees’ was placed in a certain position to try slow down the rate of erosion at Burrow Beach by specialist engineers from RPS, who have been working with the Council on a long-term strategy for managing the erosion issues at Portrane.

The Seabees cost €1.5m to install, and the council fear the moved units may now be unusable as specialist equipment had been required to move them into their original positions. In a statement, the Council said that they ‘will incur significant costs to rectify this situation at a time when resources are under significant challenge because of the economic impact of COVID-19’.

The Seabees are an interim solution, awaiting the instillation of specially designed Y-shaped groynes structures. Fingal County Council say that they continue to work with residents and businesses affected by coastal erosion at Portrane.