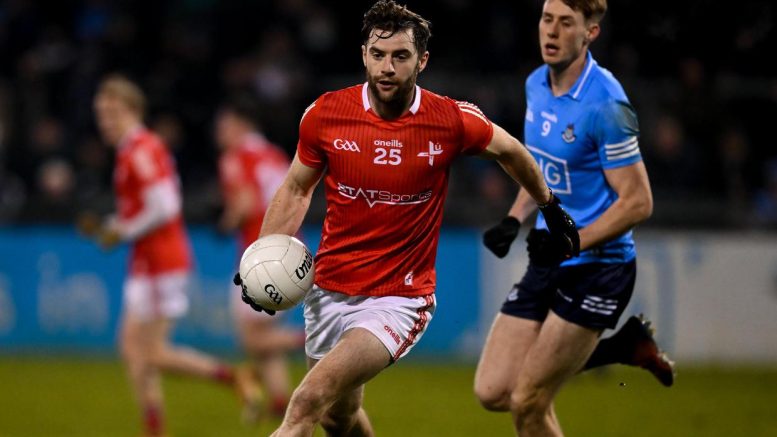 Dermot Campbell is one of a dozen survivors from the wreckage of Louth’s last trip to Leeside.

he Reds’ 5-19 to 0-16 humiliation by Cork in October 2020 confirmed the county’s relegation to Division 4 as Wayne Kierans’ reign drew to a sorry close.

And yet the Dreadnots clubman concedes that the qualifier draw could have been worse for Mickey Harte’s men. The Rebels, after all, have struggled for consistency during the year and were on the wrong end of a 12-point scoreline against Kerry last time out.

“You have to go in with a belief that you can compete,” said Campbell, looking ahead to Saturday’s Páirc Uí Chaoimh assignment.

“Each team are going into this with a different background and context and Cork, you could say, put it up to Kerry for 50 or 55 minutes, frustrated them at times.

“But, at the same time, in regard to our camp, we’re definitely not happy with how we showed against Kildare. We’re not thinking for one minute that that is a true reflection of our capabilities and quality.

“We’re nearly coming in hoping to get back to the way we were during the league. It’s obviously a step-up and we’re going in as underdogs, but we’re really hopeful and working hard.

“Like we got performances in most of the league matches and dug out results. I think we got that in the first 10 or 15 minutes of the second half against Kildare and we’re on a mission to get back to playing and working the way we can, getting our main men in the scoring positions and I think if we can take rectify what went wrong against Kildare, I think we’ll be there or thereabouts.”

So what would represent a good All-Ireland series display? That seems to be the question dripping from every Wee supporter’s tongue since the Tullamore travesty.

“We reflected after the Kildare game and asked what a realistic goal for us was – and obviously that’s to stay within camp – but we have our goals, they’re short-term goals, and Cork is just a step on that goal.

“It’s a big obstacle but we’re just looking to get a win and a performance. For a Louth team to be in an All-Ireland series, where you’re in the top half of the country, to get a win in that competition, against any team, is going to be a real positive.

“It would be hugely positive if we won and would probably show signs of progression.”

It’s been a difficult campaign for the talented defender on a personal front. Injury and Covid during pre-season hampered his progress and saw him lose the regular starting berth he had earned through his performances in Mickey Harte’s first term at the helm.

“It’s been a bit of a stop-start year for me and then when you’re trying to get back into a team that’s winning, it’s very hard and I don’t think me being selected would have done other lads’ justice just because I’m back from injury or I was starting games gone by.

“We trained hard for the last few weeks and it’s been good for a few lads like myself who are only getting over injuries and that has added to the depth of the panel.

“But you just have to keep the head down because it’s tough, especially when you’re on a roll like we were in the league. You’re obviously delighted at how things are going and there is a part of you that would like to be more involved, but there’s been lads who’ve been feeling like this or been squad players a lot longer than me.

“I’ve probably learned to be a bit empathetic towards those lads because I’ve been fortunate enough in all my years with the club and country to have been a regular starter.

“But it does make you re-focus. There’s obviously stuff that I’m not doing and need to improve on to get back into the team, so it can go two ways – man up and try to rectify these things or you can sulk, and there’s no time for sulkers or energy-sappers, that’s not what we’re about. We’re all in this together.”

And they’ll need to be for the Wee Cork conquest to conclude successfully.