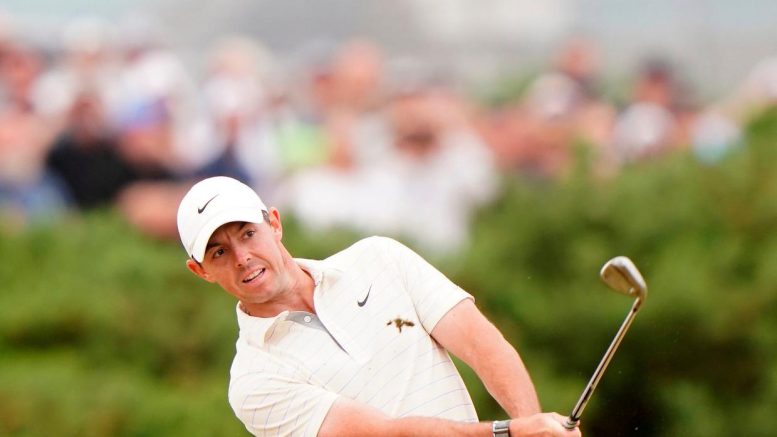 Rory McIlroy reportedly cried on his wife’s shoulder as he was driven away from the recording area at the Old Course following his near miss in The Open.

e’d manned up and faced the press after his closing 70 proved insufficient to hold off the charging Cameron Smith at St Andrews and while he made all the right noises for the TV cameras and the reporters afterwards, he was left to come to terms with the fact that he didn’t win.

When we look back at the 2022 majors, nobody will remember that McIlroy was clearly the world’s most consistent player in the men’s game’s four biggest events.

At a time when the Majors are growing in stature following the disruption to the regular tours caused by the Saudi-backed LIV Golf series, the Holywood star was second in the Masters, eighth in the US PGA, tied fifth in the US Open and third, eventually, in The Open.

You could argue he was not a serious contender for any of the first three Majors heading down the stretch. But with a two-shot lead turning for home in The Open, his homeward nine of 35 strokes was never going to get the job done given the birdies available on the Old Course.

But in becoming the 19th player to finish in the top 10 in all four for the third time in his career, McIlroy will be desperately trying to convince himself it’s only a matter of time before he wins that elusive fifth Major.

“At the end of the day, it’s not life or death,” he said. “I’ll have other chances to win the Open Championship and other chances to win majors. It’s one that I feel like I let slip away, but there will be other opportunities… I’ve just got to keep putting myself in position, keep putting myself in there. And whenever you put yourself in that shining light, you’re going to have to deal with setbacks and deal with failures. Today is one of those times. But I just have to dust myself off and come again and keep working hard and keep believing.”

Pádraig Harrington was once famous for his runner-up finishes but he knew that putting his head on the block often was the only way to get over the line.

And yet Harrington admitted in those years after his Major wins when he was arguably playing some of the best golf of his career that consistency was seriously over-rated.

“You know, winning is the ultimate measure, but there are secondary goals,” he said in 2013. “Playing well, playing consistent, playing solid, getting yourself in contention a lot, because winning is obviously a result, and sometimes you can do everything right and not quite get there.

“But there’s no doubt, in terms of outside pressure, most people would judge you purely based on whether you won or not. Say I play 20 times on the TOUR over here and I miss 18 cuts and win twice, I’ll have 18 Friday evenings where I’ll be a sorry person to be having dinner with. I’ll have two great weeks. So in terms of the year, I’ll have 18 lows and two highs, which would be pretty miserable. But in two years’ time, all I’ll remember is the two wins, and my record will remember the two wins.

“As much as we try, we spend all our time trying to be consistent, it’s the inconsistent wins that are probably the most important thing. Hopefully when I finish up they won’t say he won three majors. He won eight majors. And he won 40 events.

“So my CV will always start with that. It won’t go down, he made 20 cuts in 2013 or something like that, as much as it’s a measure of consistency, it’s not a long‑term measure of us. Winning is the most important thing.”

For the record, McIlroy is the 19th man to finish in the top 10 in all four majors in a single season since 1937.

But he’s also the first since Rickie Fowler in 2014 to do so without winning one.

The last multiple Major winner to come away winless from a year with four Major top 10s was Ernie Els in 2004.

Ironically, McIlroy’s strokes gained total in this year’s majors (53.56) was the best by a non-Major winner since the Big Easy gained 60,82 shots on the rest 18 years ago,

This year, just nine players made all four Major cuts and while McIlroy’s aggregate total of 29-under par was eight shots better than Will Zalatoris’, the former Wake Forest star was beaten in a playoff for the PGA and edged out by a shot in the US Open.

There are 253 days to go to the Masters and McIlroy’s task now is to maintain his high level of play for the next eight months and continue to believe, as he said at St Andrews, that if he keeps knocking on the door, “eventually one will open.”