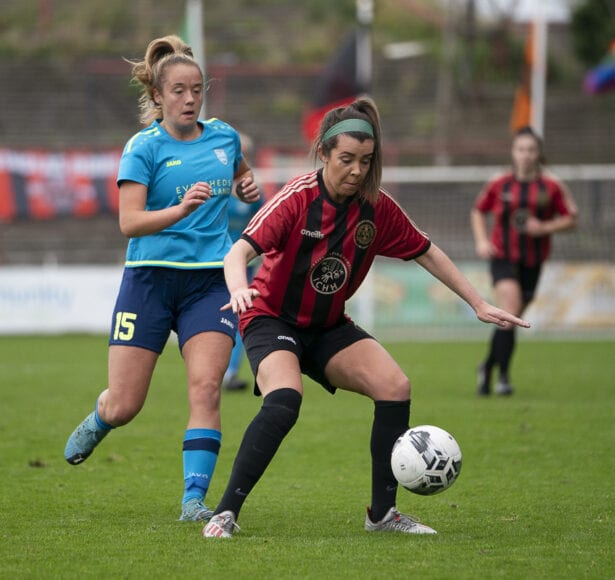 Bohemians celebrated a piece of history on Saturday afternoon as they hosted the first-ever Women’s National League game at the home of Irish football.

They couldn’t mark the occasion with a win at Dalymount Park but a scoreless draw with DLR Waves stretched their unbeaten run to two following their first-ever win over Athlone Town last week.

Bohs have played all their home games of their debut senior season to date at the Oscar Traynor Complex but the plan was always to stage a game or two to Dalymount Park.

The Covid-19 shutdown, and subsequent shrinking of the league calendar from 18 to 12 games, has limited opportunities but it shows how far the club have come in such a short time.

And assistant manager Pat Trehy admitted he was fielding calls from players in the run-up to the game to express their excitement at playing in such an iconic venue for Irish sport.

“When we went to the board at the start of the season we asked for a couple of games here,” the former Shamrock Rovers and Bray Wanderers keeper tells the Dublin Gazette.

“The Bohs board are exceptional people – they never say no to anything I ask for within reason and Dublin City Council are kind enough to let us use it.

“The atmosphere and the vibe is different [to the non-enclosed pitch at the Oscar Traynor. The girls were really excited.

“They were texting me last night and a couple of girls were ringing me to tell me how excited they were to be playing on it. It’s like there’s lots of ghosts around the place.

“Hopefully we can play the game against Treaty here, but at the moment we don’t know because the men’s team play here. I’ll ask the question but we can’t be too greedy either.”

In spite of picking up a point – their second scoreless draw against Waves this season – the Sean Byrne-managed Bohs side slipped to the bottom after Athlone beat Treaty United.

Those are Bohs’ final two games of the season, following the international break, and will determine their final position but, for Trehy, merely holding their own makes the season a success already.

“It’s very difficult when we have such a big squad because a lot of girls don’t play.

“You’d feel sorry for girls because every training session we have 25 players, at least.

“It’s difficult when you see them train and train and put up with the cold weather and they don’t get to play.

“That’s something that upsets us as coaches and managers, but there’s nothing you can do.

“It’s a winning league – it’s not like the under-17s where it’s more of a development league. We have to play our best team – it’s just the nature of the beast.

“Hopefully the players will be patient and stay with us, listen and learn from us and come on the journey. That’s all you want.”

Shamrock Rovers are one step away from a perfect season

Mooney and Carroll on crest of a Wave at DLR