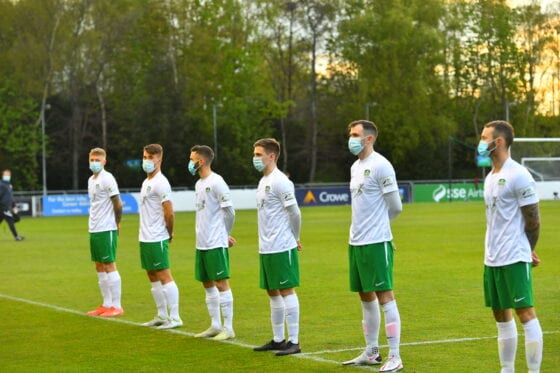 LOI FIRST DIVISION: Colm Whelan was the star as UCD won the South Dublin bragging rights with a comprehensive 4-1 victory over Cabinteely at the UCD Bowl.

The first South Dublin derby was a foregone conclusion by half-time as the Students ran into a two-goal lead and pressed the advantage home in the second half.

Whelan sealed his hat-trick by the 47th minute and, while Dean Casey pulled one back, the striker laid on the clincher for Donal Higgins to cap off a superlative performance.

“I’m happy to get the goals and it was a great performance from the lads,” Whelan told the Dublin Gazette.

“They’re a good side and they put it right up to us, so we were lucky enough to get the three points. I can’t complain with the hat-trick!”

The talk of the ground in advance of kick-off, however, was less to do with the game at hand than the events of the previous week.

Cabo had been forced to call off last Friday’s home game with Galway United due to a positive Covid-19 case and the FAI decided to award the away team a walkover.

A leaflet was distributed through the crowd in advance of kick-off on behalf of the player in protest at the decision to give the three points to Galway.

In the end, there was little doubt about who deserved the three points from the Bowl as Whelan put on a masterclass to send Andy Myler’s side above Cabinteely into second.

Whelan broke the deadlock inside six minutes as he bent his run perfectly to break the Cabo offside line and run clear before side-footing the ball confidently past Adam Hayden. The home side continued to dominate and Sam Todd, a winter signing from Finn Harps, passed up a great chance from close range before seeing a header rebound back off the post.

Cabo hit the woodwork themselves shortly afterwards as Marty Waters eked out a yard of space on the edge of the box, but the post denied him an equaliser against his former club. Just as it seemed UCD were set to take a 1-0 lead into the break, the livewire Whelan doubled the advantage with the last kick of the half.

The striker was probably marginally offside but he carried on and kept his cool to slot his second past the despairing Hayden.

And within two minutes of the resumption, he tied up his hat-trick with the best finish of the lot, cutting in from the left and curling the ball deftly into the bottom corner.

Casey gave the visitors some modicum of hope shortly afterwards as he sent a free kick from 20 yards flying past Lorcan Healy in the Students’ net.

Whelan turned provided moments later, however, teeing up Higgins for his first goal for the club since signing from Galway over Christmas.

PHOTO – by John Crothers – Colm Whelan of UCD scores his second goal of the game.