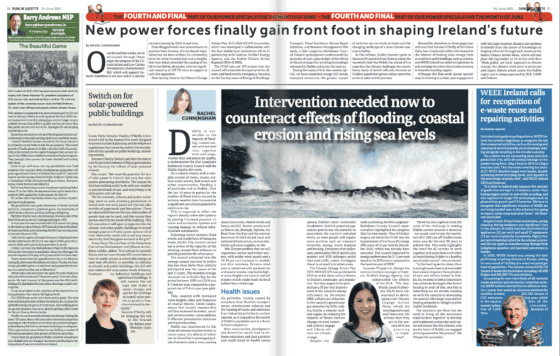 Irish electrical goods recycling scheme, WEEE Ireland, has called on legislators to recognise the role that unreported activities, such as the reusing and repairing of electrical goods, are increasingly playing alongside recycling in the circular economy.

“As a nation we are consuming more electrical goods than ever, with the annual tonnage on the market rising from 15kg a head in 2016 to 21kg a head last year. This rise makes meeting the annual EU WEEE directive target even harder, despite achieving record recycling levels, as it equates to the percentage of goods sold”, said WEEE Ireland CEO Leo Donovan.

“It is time to realistically measure the amount of goods that are kept in circulation, rather than basing targets solely on end-of-life recycling, and also legislate for longer-life technologies such as photovoltaic panels and EV batteries. We have to recognise that significant volumes of WEEE are not being handed over to the schemes but going to export, metal scrap and other flows”, Mr Donovan concluded.

Despite Covid-19 and travel restrictions, spring cleaning during lockdown saw significant rises in the amount of easily hoarded small electrical appliances (22 per cent) and small IT equipment (13 per cent) recycled by households. Eighty four per cent of material collect by the scheme is recovered for use again in manufacturing through both indigenous operators and specialist processors in Europe.

In 2020, WEEE Ireland was among the best performing recycling schemes in Europe, setting its new record of 10.93kg of e-waste recycled per head of population. The scheme recovered 38,724 tonnes of waste electrical items, including 120,000 fridges and 200,000 TVs and monitors.

Accounting for over two-thirds of all national waste electrical and electronics collection activity, WEEE Ireland claimed that its efforts to recycle e-waste that would be otherwise destined for landfills avoided 225,182 tonnes of CO2 emissions last year, which is the equivalent of the annual carbon consumption of 4,504 hectares of trees.

Protect Your Skin With These Tips From Avène

Celtic thrashed St Johnstone 7-0 at Parkhead to extended their lead at the top of the cinch Premiership to nine points. Independent.ie – Independent.ie RSS Feed …

The Ukrainian city of Lviv has been rocked by a series of powerful explosions as US President Joe Biden visited neighbouring Poland. Independent.ie – Independent.ie RSS Feed …