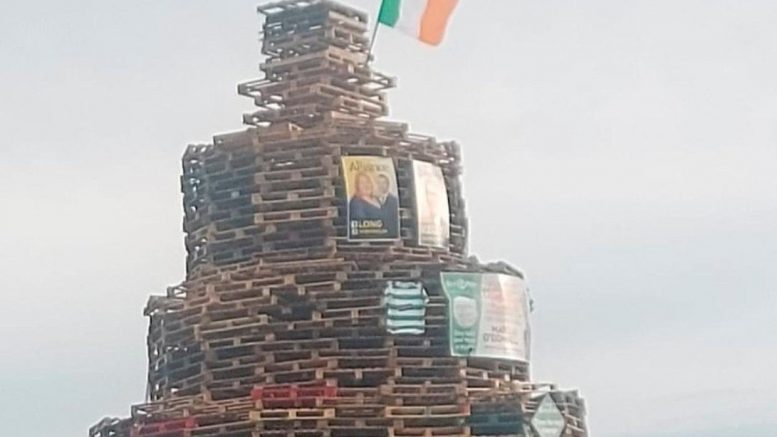 Perhaps we have become so accustomed to sectarian hatred at this time of the year that we tolerate it. Well, we shouldn’t.

KAT’ (Kill All Taigs), declared the placards on multiple Eleventh Night bonfires: a rallying cry to ethnically cleanse almost half the population here.

In no other part of the UK would it be acceptable to call for people to be murdered because of their religion.

Imagine the outrage in Britain if crowds gathered for a ‘cultural event’ around a blazing pyre bedecked with ‘KAJ’ (Kill All Jews) or ‘KAM’ (Kill All Muslims).

A collective blind eye wouldn’t be turned to such hate speech in Birmingham or Bradford so why should they be in Belfast?

How do such genocidal slogans fit with what’s often presented as a family-friendly occasion?

Does calling for every Catholic man, woman and child to be slaughtered embrace diversity and inclusivity?

‘All Taigs Are Targets’ read the slogan above an image of cross hairs on the Cregagh bonfire.

The Highfield bonfire was also decorated with messages of hate. Sinn Fein’s Gary McCleave said his children came across the pictures on social media and wanted to know “why their daddy is on a bonfire to be burnt”.

Election posters of two West Belfast Assembly election candidates appeared on the Glencairn bonfire along with a ‘KAT’ sign.

Bonfire builders clearly don’t do irony. The two politicians singled out are the ones whose cross-community efforts have been huge.

He’s provided essential supplies such as cereal, rice, pasta and chicken so families on both sides of the peace line can feed their children. Gas and electricity vouchers and school uniforms have also been delivered to ease the burden during the cost-of-living crisis.

Paul doesn’t just drop the packages and run away. He will often spend afternoons chatting at the doors of those he’s helping.

Yesterday, he was inundated with messages from people saying they were “shocked and ashamed” that his posters were on the Glencairn bonfire. “Not in our name,” they told him.

People Before Profit’s Gerry Carroll passionately supported Caterpillar workers in their recent strike, even submitting a petition to recall the Assembly to discuss it.

The company’s Belfast factory is two miles from the bonfire site and many of its workers are from the unionist community, including some from Glencairn.

Carroll referred to the “deafening silence from many unionist politicians in the face of this kind of sectarian intimidation”.

He’s right: it’s time for leadership. UUP leader Doug Beattie has unequivocally made his views known, but the same can’t be said for many other senior figures in unionism.

Of course, such sick sectarian displays aren’t solely the preserve of one community. In recent years, the names of murdered prison and police officers have been placed on the August bonfire in the Bogside.

Mindless morons thought it appropriate to gloat about the deaths of Ronan Kerr, Stephen Carroll, David Black and Adrian Ismay.

In Newry, a bonfire was adorned with offensive messages including one celebrating the death of 18 soldiers in Narrow Water (‘18 Brits blown to bits’)and another mocking the late IRA victims campaigner Willie Frazer (‘Join your da in hell, Willie’).

Sinn Fein strongly opposes August bonfires. Those on the ground in republican areas must work exhaustively to ensure there is no repeat of such shows of sectarian hatred next month.

What’s most depressing about the plethora of ‘KAT’ signs on Monday night is that the younger generation is growing up with this bigotry and poison all around them.

It’s almost a quarter of a century since the Good Friday Agreement. Gathering around a burning pyre celebrating a call for your neighbours to be wiped out is not moving with the times.

On line eMagazine for dog lovers in Dublin