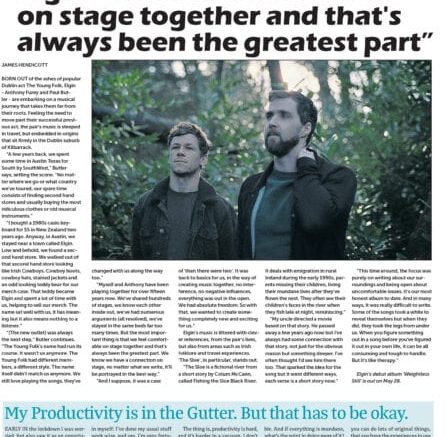 Born out of the ashes of popular Dublin act The Young Folk, Elgin – Anthony Furey and Paul Butler – are embarking on a musical journey that takes them far from their roots.

Feeling the need to move past their successful previous act, the pair’s music is steeped in travel, but embedded in origins that sit firmly in the Dublin suburb of Kilbarrack.

“A few years back, we spent some time in Austin Texas for South by SouthWest,” Butler says, setting the scene. “No matter where we go or what country we’ve toured, our spare time consists of finding second hand stores and usually buying the most ridiculous clothes or old musical instruments.”

“I bought a 1980s casio keyboard for $5 in New Zealand two years ago. Anyway, in Austin, we stayed near a town called Elgin. Low and behold, we found a second hand store. We walked out of that second hand store looking like Irish Cowboys. Cowboy boots, cowboy hats, stained jackets and an odd looking teddy bear for our merch case. That teddy became Elgin and spent a lot of time with us, helping to sell our merch. The name sat well with us, it has meaning but it also means nothing to a listener.”

“[The new outlet] was always the next step,” Butler continues. “The Young Folk’s name had run its course. It wasn’t us anymore. The Young Folk had different members, a different style. The name itself didn’t match us anymore. We still love playing the songs, they’ve changed with us along the way too.”

“Myself and Anthony have been playing together for over fifteen years now. We’ve shared hundreds of stages, we know each other inside out, we’ve had numerous arguments (all resolved), we’ve stayed in the same beds far too many times. But the most important thing is that we feel comfortable on stage together and that’s always been the greatest part. We know we have a connection on stage, no matter what we write, it’ll be portrayed in the best way.”

“And I suppose, it was a case of ‘then there were two’. It was back to basics for us, in the way of creating music together, no interference, no negative influences, everything was out in the open. We had absolute freedom. So with that, we wanted to create something completely new and exciting for us.”

Elgin’s music is littered with clever references, from the pair’s lives, but also from areas such as Irish folklore and travel experiences. ‘The Sloe’, in particular, stands out.

“The Sloe is a fictional river from a short story by Colum McCann, called Fishing the Sloe Black River. It deals with emigration in rural Ireland during the early 1990s, parents missing their children, living their mundane lives after they’ve flown the nest. They often see their children’s faces in the river when they fish late at night, reminiscing.”

“My uncle directed a movie based on that story. He passed away a few years ago now but I’ve always had some connection with that story, not just for the obvious reason but something deeper. I’ve often thought I’d see him there too. That sparked the idea for the song but it went different ways, each verse is a short story now.”

“This time around, the focus was purely on writing about our surroundings and being open about uncomfortable issues. It’s our most honest album to date. And in many ways, it was really difficult to write. Some of the songs took a while to reveal themselves but when they did, they took the legs from under us. When you figure something out in a song before you’ve figured it out in your own life, it can be all consuming and tough to handle. But it’s like therapy.”

Elgin’s debut album ‘Weightless Still’ is out on May 28.

Teenage Fanclub: “We never got caught up trying to follow trends”